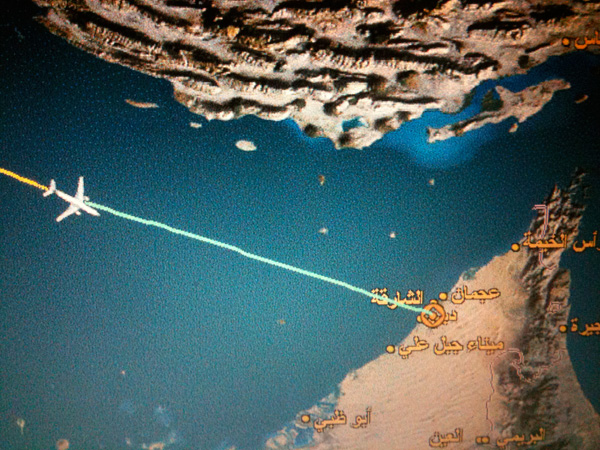 As we headed to the airport (at 2 pm for a 5 pm flight) I suddenly realized I was completely unprepared for the intense emotions rolling over me. Rob and Tyler escorted us to the security line and I couldn’t hold back the tears as we said our final goodbyes to the States.

Just to add to the raw emotions I was already feeling, the lady at the ticket counter was an absolute witch. As soon as we walked up to the (International) counter she treated us with a mix of disdain and annoyance. We had been considering paying for an upgrade to our seats because of the long flight ahead of us and were curious if this would be a possibility. She said this was impossible because we were not “members” of the Medallion Club and had not paid enough for our seats. This would have been fine if she would have communicated it kindly, but instead, she looked down her nose at us and made it seem like we just weren’t “good enough.” We also had to rearrange most of our bags and take a few items out (to send home with Rob) because a few of them were (one or two pounds) overweight. Finally, we asked the cost of the 2 additional bags (on top of the 4 allotted by the airline) we were bringing along since the University was reimbursing us for the amount. We just weren’t sure how much Delta charged? She let us know it would be $200 each in such a way that said “you don’t look like you have the money to do this.” Sheesh.

This all might have been fine if I wasn’t already fighting back an overwhelming wave of anxiety and sadness about leaving. Here’s what I scribbled down to myself as we waited for the plane: Trying not to have a full on breakdown at RDU. I am absolutely going through the “fear-side” of this emotional roller coaster moving to Dubai. Fear of leaving a fantastic life. Fear of loosing amazing friends. Fear of my precious cats missing me (and on the other hand, forgetting me). Fear of the pain I am causing those who I’m leaving behind. Fear I’m making a mistake. Fear of the unknown. I am fighting back tears and I don’t know if I’m going to be able to hold it together. Abandon ship! Abandon ship!

Thankfully, the 13 hour flight from Atlanta to Dubai (after the short trip from RDU to ATL) was pain-free. Our seats (57 A and C) were located close to the back of the plane so asking for another drink or waiting for the bathroom was easy. We were given three meals (chicken dinner, sandwich snack box, pizza lunch) and they were all very good considering it was airline food. Both Jordon and I took a sleeping pill so we could sleep through the night and although I woke up off-and-on during the entire trip, it helped a lot. After sleeping for about 6 hours I awoke to the sound of a baby crying and only one hour left in the journey. Not bad at all. We finished the day of travel watching the (free) movies and tv shows offered on the personal tvs in front of us. I watched Sucker Punch and loved it (I totally recommend it if you haven’t seen it yet).

*Interesting note: The personal touch screen TVs (at each of our seats) showed us all kind of information about our trip. Everything from how long we had been in the plane, how long we had left on the journey, temperature, and even which direction pointed towards Mecca. How cool is that? 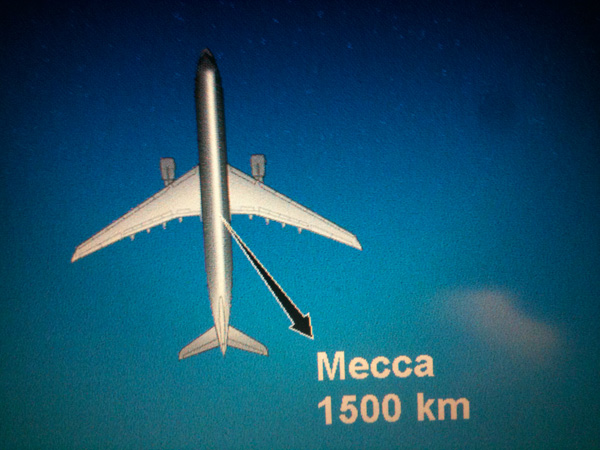 Once we landed we were both somewhat worried about going through customs and what would be expected. Luckily the University had arranged a meet-and-greet group called Marhaba to accompany us through the process and WOW did we feel like royalty. Talk about a different experience from the beginning of the day. They picked us up in a 6-person buggy so we wouldn’t have to walk down the long hallway to customs and even took us to our own personal line to go through customs (rather than waiting in the loong line in front of us). Finally, we were escorted to the baggage pickup, given two trolleys for our luggage, and led directly to our driver. The driver took our luggage, led us to a decked out Lexus, and drove us the short distance to our hotel. Everyone was extremely helpful and kind, leaving both of us with the feeling that it was the best travel experience of our lives. What a relief after such a stressful morning.

One Reply to “A Day of Travel”